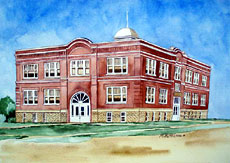 The Cincinnati school in the early 20th century.

This building had two rooms on the first floor; one for study and the other for students reciting in groups.  The upstairs contained one large room for the high school. The first class to graduate from this building was in 1889 with five members.

In 1908, a new building was started just behind the then-present school building. (This is the building my watercolor depicts from that year.) Eight people graduated in 1909. Caps and gowns were first worn for graduation in 1917, which was held in the West Christian Church or Opera House until 1932, when the first class graduated from the new gym.

The last class to graduate from Cincy High was in 1961.  The building continued to be used as an elementary building until May 1974. The building was then torn down with sad farewells. January 1975 marked the opening of the present building, serving kindergarten through third grade.