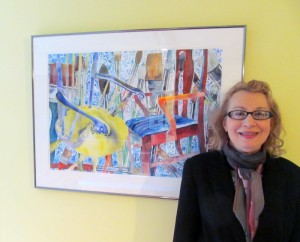 Marybeth Heikes is pleased to announce that her watercolor painting Soldiers & Sables has been accepted in the 2016 All Media National Exhibit at the Octagon Center for the Arts in Ames, Iowa. The opening reception will be January 29, 2016 and continue through April 7. This particular painting was previously exhibited in the Rockies West National Show last year.

The painting is a continuation of her Chairs Series that began in the late 1980s. She has completed over 100 paintings in this series, and many have received awards in national competitions throughout the years.

Tags: octagon center for the arts, chairs in the jungle, show